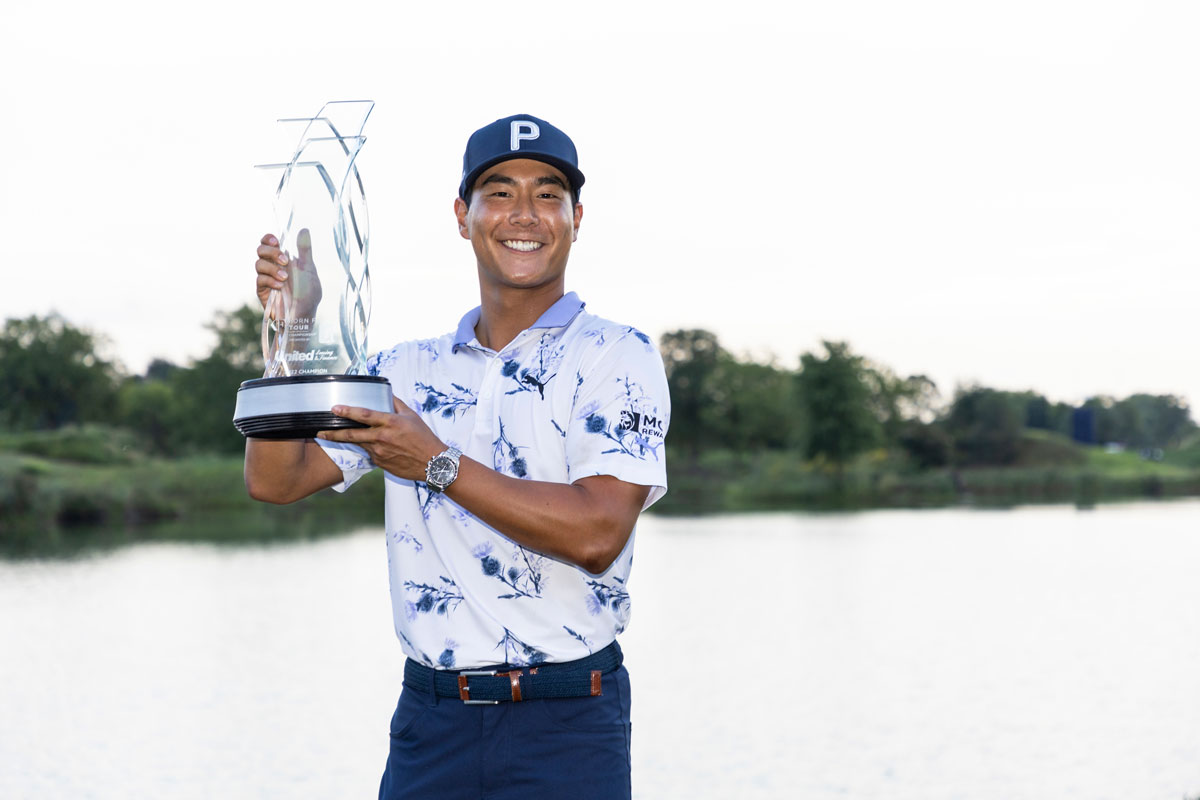 Justin Suh closed out his first PGA Tour-sanctioned victory with a 4 under 68 in the final round of the 2022 season-ending Korn Ferry Tour Championship presented by United Leasing & Finance. Suh made just three bogeys all week at Victoria National Golf Club — the fewest bogeys by any player in the field — and finished at 21 under par, two strokes ahead of Austin Eckroat, who was among the 25 players awarded PGA Tour cards via The Finals 25.

By virtue of the victory and the 1,000 points awarded, Suh finished No. 1 on both the Korn Ferry Tour Finals Eligibility Points List and the season-long Korn Ferry Tour Eligibility Points List. As a result of sweeping the No. 1 rankings, Suh will have fully exempt status for the 2022-23 PGA Tour season, an exemption for the 2023 PLAYERS Championship, and for the first time in history, an exemption for the 2023 U.S. Open.

Suh joins world No. 1 Scottie Scheffler (2019) and PGA Tour winner Chesson Hadley (2017) as the only players in history to win both points lists.

“My game has progressed so much over the course of the year, and it feels extremely gratifying that it paid off,” Suh said. “I wasn’t really thinking about the overall season title. I wanted to win this event, especially since it’s the last Korn Ferry [Tour] event. I knew I could win out here. I’ve been close so many times. To put it all together, it feels great. It’s one of the most important weeks of the year. I know it’s a lot of stress for guys fighting to get their [PGA] Tour cards, but it’s an exciting week. I’m just really happy a couple of my friends got in.”

Suh carried a one-stroke lead into the final round and maintained the outright lead for the majority of the day. The San Jose, California, native birdied the par-4 fourth, bogeyed the par-3 seventh, and immediately bounced back with a birdie at the par-4 eighth to turn at 1-under par. Suh birdied two of the first three holes on the back — the par-5 10th and par-4 12th — and put extra distance between himself and Eckroat with a birdie at the par-5 15th.

Goya, who played alongside Suh and Nicholas Lindheim in the final group Sunday, eventually held on for his first PGA Tour card as he played the final six holes at 1 under par.

Another central figure of drama Sunday afternoon was Kyle Westmoreland, who played collegiately at the United States Air Force Academy and attained the rank of captain as he served a five-year stint with the United States Air Force after graduation. Westmoreland was anywhere from No. 23 to No. 26 on the Korn Ferry Tour Finals Eligibility Points List after he finished his round with a birdie at the par-5 ninth. After a relatively lengthy wait, Westmoreland finished No. 25 and became the first Air Force Academy graduate to earn a PGA Tour card.

The first man out of The Finals 25 was Joey Garber, who double bogeyed the par-4 14th but closed with four consecutive birdies for a chance at a return to the PGA Tour. Garber signed his scorecard as the No. 25 player on The Finals 25, but Nicolas Echavarria’s bogey-free 6 under 66 — highlighted by birdies on the par-5 15th and par-4 17th — ultimately knocked Garber out.

The 2023 Korn Ferry Tour schedule will be announced Tuesday, Oct. 4.

United Leasing & Finance is a customer-focused and growth-oriented leasing and finance company committed to providing custom financing solutions to businesses across the U.S. and Canada. For almost 60 years, United has partnered with clients to achieve mutual success from small businesses to Fortune 100 companies.